So we see the US heading into another period of election craziness and choosing a new leader but is there really a choice? 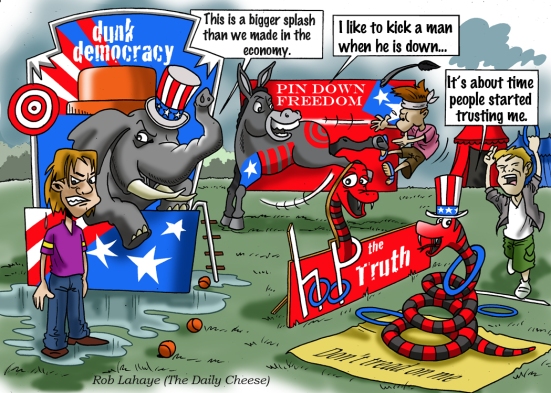 The system that a democratic country uses reflects on that society and its values. We see America’s election season degrading the democratic process. The worst attributes of political cultures obsession with trivialities, the dominance of horserace “reporting,” and mindless partisan loyalties, become more pronounced.

All this distracting voters from the facts of endless wars, consolidation of unchecked power, the rapid growth of the Surveillance State and a regime of secrecy, massive inequalities in the legal system, continuous transfers of wealth from the disappearing middle class to large corporate conglomerates.

This is all ridiculous enough and maybe could be tolerated if “election season” were only to last a few months like it is in most civilized countries. But in America, the fixation on presidential elections takes hold for at least eighteen months before the actual election occurs.

This means that more than a third of a President’s term is held in the midst of this petty circus of distractions. Thus, an unauthorized, potentially devastating covert war both hot and cold against Iran can be waged with virtually no debate, just as government control over the Internet can be advanced.

How can someone who is meant to be running and looking after the country’s best interest do so when they are thinking about reelection for a significant part of their term in office?

We see the inability and/or refusal to recognize that a political discussion might exist independent of the Red v. Blue Cage Match.

So indoctrinated have the people become to this two party system it does not matter how much support an independent receives they are seen as a gimmick, a joke, a waste of a vote. Yet it is they that carry the true spirit of democracy. They have battled the two party system and risen to a position where they believe they have a chance to effect change. This achieved from the support given by the voting public.

If the truth is to be told this is the reason they are such a threat, they highlight to people that they have the power.

What do we see next?

The two main parties deal and scheme and connive to destroy any person that is outside of their red blue rigged competition. They roll out their big guns. Main stream media do a wonderful job reporting on stories that try to make these independents look kooky and foolish and they try to use embarrassment as a tool to control votes

“You want to vote for whom. hahahahaha really but he/she is not democrat or republican. What a waste of a vote”

On August 24, Republican Party operatives Cynthia Rees and Kelly Mills filed a challenge with Secretary of State John Husted‘s office in order to restrict Johnson from being on the Ohio ballot for allegedly violating the state’s sore loser law.

According to paragraph three Section 3513.04 of the Ohio Revised Code:

In layman’s terms, the law essential means that a candidate who lost a partisan primary cannot run with another party or as an independent in the general election.

“Once again, the GOP is acting like the schoolyard bully,”
said Libertarian Party of Ohio Executive Committee Chair Kevin Knedler. “They are afraid the voters are noticing they are out of good ideas and will turn to a mainstream candidate like Gary Johnson who has some character and a positive vision for our country’s future.”

This despicable treatment of alternative candidates by the reigning two parties shows what they are willing to do in order to retain their grip on power, reform is needed which would help to promote the legitimacy of third party contenders. Instant-runoff elections should be adopted, especially at the local level.

According to the Web site instantrunoff.com, this is how the election process would work:

1.    “Instant runoff voting uses ranked choice ballots to simulate a traditional runoff in a single round of voting. Voters rank candidates in order of preference. They typically are given the option to rank as many or as few candidates as they wish. Indicating support for a lesser choice never counts your higher choices.

2.    Every voter has one vote. That vote is counted initially for a voter’s first choice. If a candidate receives a majority of votes after tallying first choice, he or she is elected.

3.    If no candidate receives a majority of first choices, the last-place candidate with the fewest votes is eliminated.

4.    Ballots cast for the eliminated candidate are now added to the totals of those voters’ second choices.

5.    This process of eliminating last-place candidates and adding ballots cast for those candidates to the totals of the next-ranked choice continues until one candidate wins by securing a majority of the vote

If America, the worlds because exporter of democracy wishes to show its society as being truly free and that those in office value free elections more choice should be demanded and given, If things stay the way they are today with this perpetuation of insanity it will keep the American people under the illusion of choice and halt ANY CHANCE of progress.

My Problem With The PCC Candidates