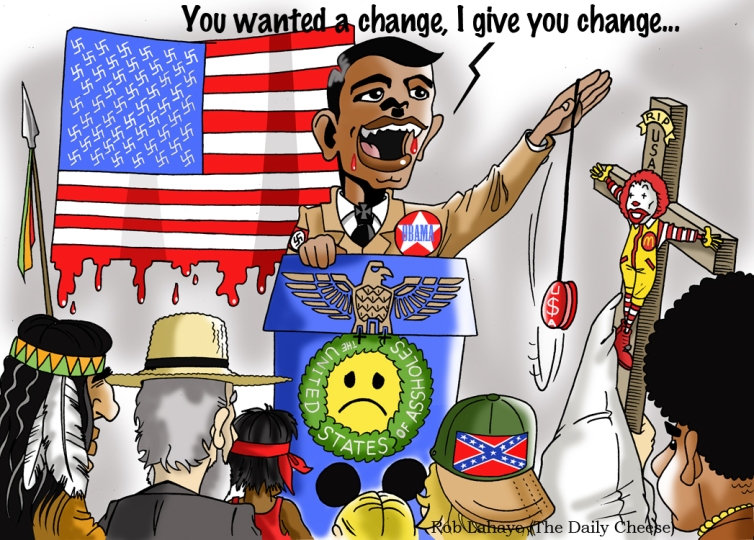 It was just a little over four years ago – July 2, 2008 to be exact – that Presidential candidate Barack Hussein Obama made an interesting promise at a campaign stop in Boulder, CO.

“We cannot continue to rely on our military in order to achieve the national security objectives we’ve set. We’ve got to have a civilian national security force that’s just as powerful, just as strong, just as well-funded.” (emphasis mine)

In a piece I found at the Daily Caller today, Major General Jerry Curry, US Army (Ret.) asks the question, “who does the government intend to shoot?” The question isn’t without some substance when you consider these facts from his article:

These “small” purchases could be considered an anomaly if not for some seriously troubling numbers from America’s “Big Brother” arm of the government, the Department of Homeland Security.

Particularly troubling about these ammunition purchases is the type of bullets these agencies are preparing to use. According to the Major General’s article. . .

Hollow point bullets are so lethal that the Geneva Convention does not allow their use on the battle field in time of war. Hollow point bullets don’t just stop or hurt people, they penetrate the body, spread out, fragment and cause maximum damage to the body’s organs. Death often follows.

In the war in Iraq, our military forces expended approximately 70 million rounds per year. The DHS purchase is more than 20 times this amount.

Those (SSA bullets) must be (for) American citizens; since the SSA has never been used overseas to help foreign countries maintain control of their citizens.

These developments should be cause for concern for Constitution-loving Americans. Are these isolated events with no serious threat to our liberty? Or are these the beginnings of something more serious?

In Adolph Hitler’s Germany – Yes, I’m making a Hitler reference when talking about Obama. . . deal with it! – there was a “national security force” called the Schutzstaffel (SS). The SS was a major Nazi organization under Hitler and the Nazi Party. They grew from a small paramilitary unit to an elite, powerful, force that served as the Fuhrer’s “Praetorian Guard’ the Nazi Party’s “Shield Squadron” and a force with as much political influence as the regular German Armed Forces.

Built upon the Nazi racial ideology, the SS, under Heinrich Himmler’s command, is said to be primarily responsible for many of the war crimes perpetrated by the Nazis during World War Two.

Other countries have, or had, their national security forces. Countries like the old Soviet Union, Cuba, China, North Korea, and Venezuela, and in the past, Hitler’s own “SS,” and let us not forget the Iranian “Revolutionary Guard.” Glancing over this list of nations…did you happen to notice any similarities among them? – Canada Free Press

The word “unconstitutional” has been used many times regarding the actions of Barack Obama, and he’s on record as being opposed to the 2nd Amendment, so when we consider the recent purchases of massive amounts of ammunition by non-military arms of the government, I think it’s time to ask ourselves. . .

What others had to say:

A white supremacist neo Nazi who ran a presidential campaign in 2008 has requested to become a lobbyist, John Taylor Bowles wishes to represent the National Socialist Movement of the United States of America.

He talked about what he’d do as president.

“I will sign an executive order, because I have a right to under the Patriot Act, to move any large sections of the population I want that I consider to be subversive or a problem and non-whites will have to leave,” he said. “Any non-whites that want to stay, we will honor them and they can be on a reservation like the American Indians. Some might say that this is revolutionary and radical, well, we think one day the situation is going to get revolutionary and radical and we’re getting ready and getting everything set right now. This is our last chance for white people in this country to keep this country and not have a change geopolitically and also geo-racially. We don’t advocate violence. When we say the word ‘fight’ that doesn’t mean fistfight. Other groups fight, they get out there and become part of the political process, and they get on the telephone and try to get people signed up. That’s fighting.”

This guy with his outdated beliefs should take a look at the country he is living in today. The government is already on a fast track towards National Socialism. The only difference between his ideas and those of the current government?

He would like to lock away people of different ethnic groups where those in power today just want to lock up everyone.

He needs to take a look into FEMA, NDAA, PATRIOT ACT and the many other bills being brought to bear on the citizens of the U.S.A.

The recent purchases of ammunition(HOLLOW POINTS) and armored vehicles by home land security and its subsidiaries should alert him to the coming completion of what he might consider  a master plan or final solution.

What he might not appreciate is the side of the barbed wire he will be viewing his dream from.

The International Socialists Want Violence In The Occupy Movement!

Cabal Takedown Advisory: Get Everyone Ready!

YOU ARE ALL SUSPECTS NOW. WHAT ARE YOU GOING TO DO ABOUT IT?

German Born Woman: “Hitler and Obama are the same” – and First-hand Perspective of Hyperinflation

Where Are We Headed?

We Must be LOST

The United States: Arms Dealer to the World