We have been having one hell of a year thus far. The threat of war looms economies are crashing and the threat of a zombie apocalypse .Now we see a new horrors the increased black market trade in human body parts.

Like Mary Shelly’s classic Frankenstein we see human body parts being harvested from the dead.

The following story taken from The Sydney Morning Herald ( http://www.smh.com.au) shows how this has increased and taken a new turn.

The head of Interpol has vowed at a public meeting in California to use the international resources of his organisation to track the illicit trade in human body parts.

Ron Noble made the remarks at the Google Ideas INFO summit in Los Angeles several hours ago.

It comes as the Herald today revealed that a US-based company accused of manufacturing therapeutic goods from improperly harvested human corpses has distributed dental implants to Australian patients.

The bodies were allegedly plundered for reusable human tissue at forensic institutes in Ukraine. The parts were then transported to a German company, Tutogen, sometimes without the consent of the families of the deceased.

Ukrainian investigators say the grisly trade has left behind what they describe as “human sock puppets” – corpses stripped of their reusable parts.

Tutogen is a subsidiary of RTI Biologics, a Florida company that is a leading provider of biological implants and listed on the Nasdaq stock exchange. Last year it turned over $US169 million.

At least 134 dental implants derived from human tissue and made by Tutogen/RTI have arrived in Australia since 2006, the company’s local distributor has confirmed, including 52 in the past year.

The identity of the donors behind these specific implants is not clear, and RTI has declined to answer questions about its global practices.

Its spokeswoman, Rhonda Barnat, said: “All tissue is recovered and processed under applicable regulations and is both safe and needed.”

Since 2002, police have conducted four big investigations into Tutogen’s suppliers of body parts in eastern Europe, including a probe now under way in Ukraine.

The RTI/Tutogen dental implants are not strictly approved for use in Australia but have been imported for individual patients under a “special access scheme” monitored by the Therapeutic Goods Administration.

The revelations are part of a project examining the global trade in body parts. The project is run by the International Consortium of Investigative Journalists, to which the Herald and the ABC’s Four Corners have contributed.

The human tissue industry has boomed in the past decade, creating a growing appetite for fresh human bodies whose ligaments, bone, skin and eyes are processed, packaged and sold to surgeons around the world.

But the consortium has found the safeguards across the globe are inadequate to ensure all tissue is obtained legally and ethically.

There are also serious questions about the transparency, with many transplant recipients, surgeons and even regulators unsure about the origins of the tissue used, which can lead to safety concerns.

In February, authorities raided a forensic laboratory in Nikolaev Oblast, in Ukraine, where officials were loading harvested human products into a minibus. The tissue was labelled: “Tutogen. Made in Germany.”

Ukrainian security services said the laboratory officials had duped the families of the deceased into agreeing to donations of what they thought would be a small amount of tissue.

Tissue from 35-year-old Oleksandr Frolov, who had died from an epileptic seizure, was among that in the vehicle. His mother, Lubov Frolova, said the harvesting was not done “according to the law”. She had noticed on the way to the cemetery that one of his feet “seemed to be hanging loose”.

“When my daughter-in-law touched it, she said that his foot was empty,” she said. The list of parts taken from her son included “two ribs, two Achilles heels, two elbows, two eardrums, two teeth”.

In the US, where about 2 million products derived from human tissue are sold each year, a body can earn up to $200,000, according to the consortium.

Authorities have reported at least 1352 infections after human tissue transplants, according to a consortium analysis, but the industry says its products are safe and are revolutionising healthcare. Cornea transplants, for example, can help the blind to see, and the recycling of ligaments can offer old knees new life.

In Australia, the industry is still nascent. The Herald has found only a handful of “biologics”, including bone glues and skin grafts, being sold here by commercial entities. 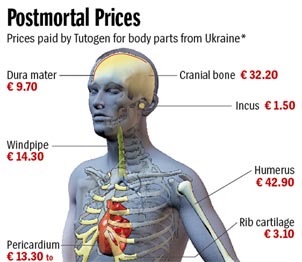 But last year the National Health and Medical Research Council found that while the laws in each state generally prohibited the sale of human tissue, exemptions did “exist in these laws, primarily for cost recovery in the processing of human tissue to be used for therapeutic purposes”.

In a paper published in October, it said: “Products derived from human tissues are already being processed, exchanged and sometimes traded, including for profit, in Australia.”

There had been investigations into Tutogen suppliers in Ukraine in 2005 and 2008.

The latter examined allegations that more than 1000 tissues a month were illegally harvested at another forensic institute before being sent to Tutogen via a middleman.

The judge prosecuting that case said many relatives had been tricked into signing consent forms or their signatures had been forged.

But the investigation ended when the prime suspect, a doctor, died.

There have been other allegations about company suppliers, including in the Czech Republic in 2002 and in 2003 in Latvia, where police investigated a Tutogen supplier for removing parts from 400 bodies without proper consent.

Police charged three employees but dropped the charges when a court ruled no consent from donors’ families was necessary. In these cases there is no suggestion of any improper conduct by RTI or Tutogen or their employees.

The RTI/Tutogen products available in Australia are dental implants made from donated human bone and marketed under the brand name “Puros”.

The TGA said that, since June 2006, there had been 106 importations of Puros cancellous bone allograft, including 51 since May last year.

Zimmer, the local distributor of Puros dental products, said RTI was the processor of the donated tissue grafts.

Dominica McCann, the company’s legal counsel, said: “Zimmer has no part in the donor sourcing or processing of any donated tissues that ultimately reach the market.”

Arthur Brandwood, a former TGA official, said the administration faced a constant challenge to keep up with biomedical technology, let alone maintain control over the source materials used in making the devices.

“Now imagine how much more complex it gets when you are dealing with materials originally sourced from human donors, and the controls over donors, processing, sterility and cleanliness, and tracking it all must be far stricter.”

In May last year, the TGA introduced new rules for devices derived from human tissue. Industry participants have a three-year grace period before the regulations take full effect.

But under the special access scheme and the new regime, individual surgeons will still be able to bring in tissue-based products that have not been approved by the TGA, for individual patients.

The trade in human organs has been big business for many years. In the past we have heard many stories featuring mainly Asian nations, they had/have citizens willing to sell their body parts to the wealthy. The Philippines and China have been the two countries that have been the focus of the world’s media on this issue.

The kidney trade forced the Philippine government to introduce strict new laws, China on the other hand still makes headlines with the practice of harvesting prisoner’s organs.

This is such a loaded issue; those that have the money and are sick will preach the benefits. Everyone wins the poor get the money needed to help them out of their economic troubles the wealthy recipients get the lifesaving operation, there are no losers.

If only it were that cut and dry. The truth is that this trade is corrupt and many receive little money the majority going to the brokers who arrange these trades. They suffer long term health problems and it cost them more money to get help with health issues caused by these needless surgeries.

Also disease is a huge factor, in a trade that is illegal and thus not regulated the potential for spreading a pathogen is huge.

The moral question about this has been answered trading in human body parts is wrong.

Modernized countries have donor systems in place. These systems should be the only source of organs and tissues. Maybe if the wealthy provided money to the agencies, scientist and others who promote donor systems or research technologies that could be used like the growing of human tissue in labs the printing and growing of organs we would see this evil trade cease.

The problem being that many just don’t care until it is too late. They do not think that one day they may need an organ so they ignore an issue that if addressed could save the lives of millions.