This is developing minute by minute.
A tragedy.
We will see this used to argue for tighter controls a story which is slowly unfolding it seems to be a lone nut but we need to know more on the gunmen.

MAYDAY! The Lone-Wolf Rises during the Dark Knight

How will the Denver shootings be used?

Update: HIGH STRANGNESS – lack of information on James Holmes prior to shooting

A wise man will hear, and will increase learning; and a man of understanding shall attain unto wise counsels: Proverbs 1:5 PPSIMMONS is the source for information on credible conspiracy probabilities we believe are valid enough to take seriously – and we believe some of them are simply not being taken seriously enough.

Our youtube channel is full of material dealing with, for example, the birther “conspiracy” which, as it turns out, gets closer to a probability every day. So check that out when you get a moment. You’ll be amazed when you learn that the man in the White House is a fraud with no credible documentation showing where he was born or even who his biological father might be.

But here’s a conspiracy that might be a little easier to prove. The Aurora, Co theater shooter named James Holmes who allegedly turned himself in immediately following the shooting was shown in court recently looking like this: 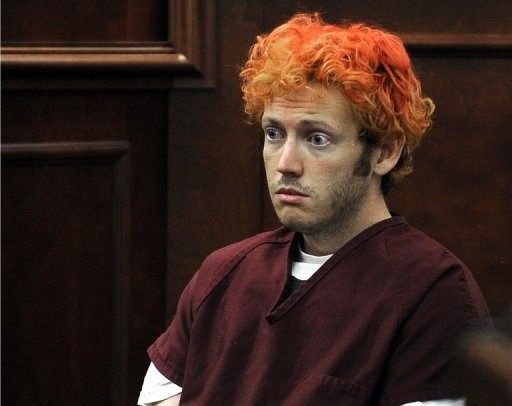 We posted a story here soon after the shooting which detailed the obvious signs of a staged event. Now this picture is giving even more evidence to support reasons to believe there may be more going on here than a simple open and shut case involving a nut-case on the loose pretending to be the Joker.

You see it all the time in movies. Someone gets caught, jailed, and then arranges to be replaced by someone else who takes the fall. And now we have that very scenario playing out here in Colorado… maybe.

You see, we also have a picture of James Holmes released to the media prior to the court footage release. That’s right – we have two pictures to compare… and yes… they have been compared. Here is the earlier picture released of James Holmes. Holmes, 24, is seen in this undated handout picture released by The University of Colorado in this July 20, 2012 file photo.

Now it may be easy at first glance to simply buy the story here and there are some vague similarities in the shape of the head but take a close look at a side-by-side image.

The ear thing can be explained by the camera angle but the nose? How about those eyes? Clearly this is not the same person. What’s going on here? Who was in that courtroom? Could it be that this whole event was staged by the anti-2nd amendment crowd (UN et al)? Could it be that some drug-addicted patsy was trotted out in front of the cameras to scape-goat the massacre in Colorado? Could it be that a branch or branches of the US government would kill their own people to disarm the masses? In a word – yes.

James Holmes, the Aurora, Colorado shooter who reportedly opened fire at a Batman movie premiere, was a medical student at the University of Colorado, pursuing a PhD in neuroscience, reports ABC News. (http://abcnews.go.com/US/mass-shooting-colorado-movie-theater-14-peop…)As part of the attack, Holmes painted his hair red and referred to himself as “The Joker,” one of the arch enemies in the DC Comics-inspired Batman movie series. (http://newyork.cbslocal.com/2012/07/20/police-14-dead-in-colorado-the…)According to news reports, this sudden violent rampage was completely out of character for James Holmes, who was described as “shy.”The New York Times is now reporting:Billy Kromka, a pre-med student at the University of Colorado, Boulder, worked with Mr. Holmes for three months last summer as a research assistant in a lab of at the Anschutz Medical Campus. Mr. Kromka said he was surprised to learn Mr. Holmes was the shooting suspect. “It was just…