As junk food continues to sweep the globe and nutrition becomes poorer and poorer, we see people growing larger and larger. 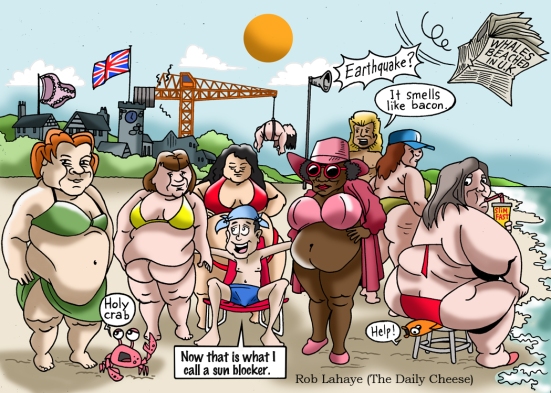 I’m shovin’ it Takeaway favourites: What you see and what you get

Obesity is more than just a nasty word no one likes to hear. Obesity is an “illness” millions face each day how they contracted this illness is in hot debate (self-inflicted gluttony or maybe because of lack of choice due to high food costs) , who should take responsibility for the food we consume?

So what, exactly, is obese?

Although there are many definitions of obesity, the generally accepted term is a person whose weight is more than 20% above expected for their age, sex, height, and body shape.

This epidemic of weight has spread from the US to Europe.

Recent newspaper reports say that at least 200 Britons are too fat to leave their homes.

The majority of these people are 35st-plus patients. They are bed-ridden and need four daily visits from healthcare assistants. Medication added to this care gives a bill that tops £80,000 a year each — leaving the NHS with a £16million care bill.

Last night Tam Fry, of the National Obesity Forum, said: “The number of super-obese people who are housebound is in the hundreds. They are hidden in the care system and no one knows exactly how many there are. It really is a tragedy.”

This problem was highlighted last week when much of the British media covered the story of Britain’s fattest teenager Georgia Davis (who needed treatment related to her 63st weight) had to be taken to hospital in a huge operation involving 40 emergency workers. Her home in Abedere, South Wales, had to be partially demolished to free her.

Yesterday the Sun newspaper reported how it took 17 firefighters eight hours to slide 40st Russell Parkin, down stairs in a bowl-shaped “sledge” after he fell ill in New Eltham, South East London.

October 2009 70st Paul Mason — then the world’s fattest man — was costing British taxpayers an annual £100,000. Paul, from Ipswich, Suffolk, went on to lose 40st in a year following a £30,000 NHS gastric bypass op. In the past two years, health trusts have revealed that they have had to send some obese patients to zoos for body scans. And Yorkshire NHS has spent £10million on super-sized ambulances and stretchers.Half of all Britons are now classed as obese or overweight, with obesity and its related illnesses costing the NHS more than £4billion a year.

With the larger body becoming the norm, we now see websites and magazines and other media that were once the reserve of people with a certain fetish gaining in popularity.

A picture gallery of obese women in bikinis — or ‘fatkinis’ — has become a massive surprise web hit.

The pictures, entitled The XoJane and Gabi Fresh Fatkini Gallery, were posted online by users after a call for snaps by blogger Gabi.The ultra-curvy lass posted a picture of herself in a black-and-white print bikini, below, and then asked readers to send in their own. 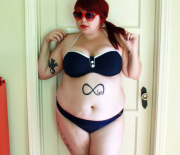 She wrote: “Inspired by the xoJane Real Girl Belly Project, I asked Lesley if she’d be into the idea of posting a gallery of fat girls in bikinis (or ‘fatkinis’, as we so lovingly refer to them in our lil’ community).

“I know first-hand how inspiring it can be to see people with bodies that look similar to my own feeling confident and happy on the beach in something other than a Hawaiian-print skirted one-piece. “Her call to arms evoked a sizeable response.

The gallery, with a tagline “31 hot sexy fat girls in skimpy swimwear”, shows girls of all shapes and sizes posing proudly in their swimmers.

I know in today’s world one must be on board the PC EXPRESS but please this is glorifying a disease, if this were pictures of women suffering anorexia there would be uproar. This reflects on a society as a whole where certain disabilities are seen as open for mocking and some are not.

Here are a few ideas for some new photo sites maybe we could start one and make it big?

Just what America needs! The PIZZA vending machine.
The Wait of the Nation II: Parent Companies, the “Bain” of our Existence!